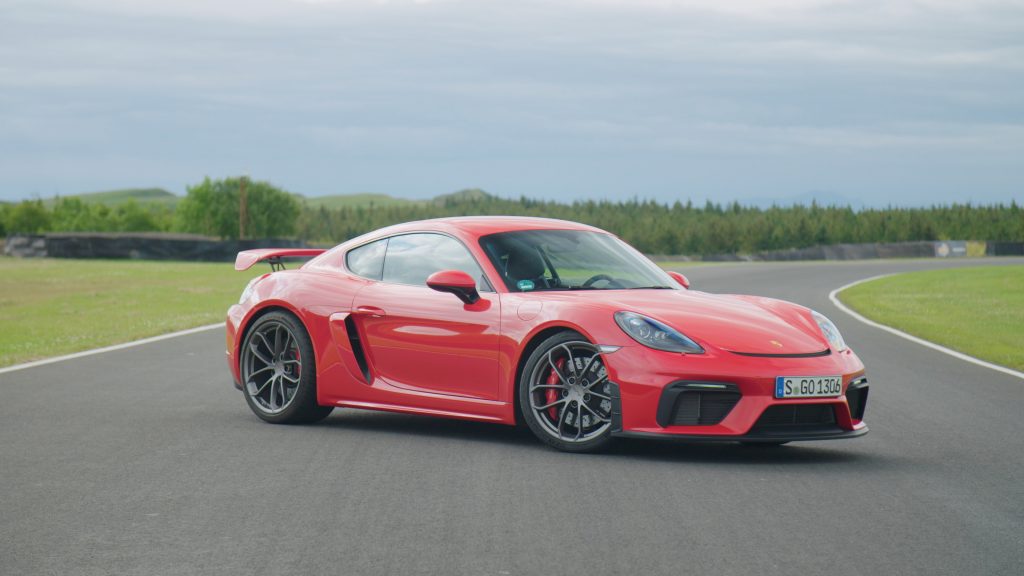 Well, probably not as you can’t actually buy one. Not a new one anyway. That remains the privilege of loyalty to the brand, and the fortunate chosen few. Beyond that I often described the 981 GT4 as one of the best cars Porsche have made in the last 10 years, along with the 911R. Porsche’s model output in that time is not exactly short of talent, including as it does, several iterations of the GT3, so it is quite a statement to make.

I love 911s and especially the GT versions. I believe they are the ultimate expression of Porschedom and everything the brand is built on, but the GT4 was a shining mid-engined beacon. Always a lovely mechanical thing to drive it, was a car that flattered its drivers in many ways; it was tactile and playful but also tricky and quirky in a way that still made you work for it, as all the best drivers cars do.

Mid-engined cars tend to have a lovely balanced feel to them as you would hope. Jump in a 911 and you have to understand how it thinks in order to get the best out of it. You need to spend time with them to learn their character and what processes you need to go through to unlock them. Cayman’s and Boxster’s feel more conventional and accessible, so are often tagged as being better.

If you know what you’re doing though, that unconventional rear-engined weirdness is ultimately more rewarding but having spent twenty years messing about in 911s, I may be biased… However, the feel of neutrality that having the mass sat in the middle with you gives, is a pleasantly tactile one. The car will respond to what you tell it, pretty much as you do so.

Cayman GT4s give you that experience with nobs on. The stiffer set up, GT3 suspension parts and trick geometry, give you a car that handles quite beautifully. It is largely vice-less and responds to your touch with a willingness that is a joy. The chassis communicates exactly what it is doing and how it is interacting with the surface. It is pretty much telepathic in the detail you get back from it, making you feel very much a part of the process as your inputs are translated into action.

A lot of modern cars isolate the driver from the real world. Take the outgoing BMW M4 as an example. A car that has sacrificed delicacy for all out power in an attempt to hide its growing weight, making it unwieldy and unable to get out of its own way. Push an M4 hard and you will need a new bulb in the traction control warning light.  Turn it off and you’ll probably need a new M4.

You will never feel like that with a GT4, it never feels heavy or indelicate. It can’t even spell unwieldy.

I said largely vice-less. Be in no doubt that Cayman GT4s are thoroughbred cars. Ok they don’t have the astonishing GT3 engine in them, but they are set up and developed by the same group of people. The razor sharp chassis with all of that instant response and feedback, rewards good technique. If you start to push harder, it demands that you know what you are taking on.

What makes the car agile also makes it tricky on the limit. Get to the edge and they can be snappy in a way that a 911 never is. The wet can be a real adventure, especially if you happen to be on Michelin Cup tyres. Be in no doubt that balanced and tactile as they are, GT4s can also bite.

I have been lucky enough to have spent many hours carrying out passenger rides in them and on a tight, low friction track they are very rewarding but equally, hard work. You have to constantly wrestle with them to keep it on the boil.

They react very quickly and can catch you out with instantaneous and biblical understeer or a lighting fast spin, occasionally all at once. Mostly though you can dance around on and over the limit for lap after lap, as long as you keep ahead of the thing with your inputs and thought processes. It will sense weakness if you don’t.

The 718 GT4 then, follows pretty much the same recipe. It looks a bit more finished with a big rear diffuser and I quite like the new engine. The interior remains identical and is typical Porsche; well thought out and honed from a solid.

Just like a racing car, the brake pedal barely moves and only works when you’re pushing so hard on it that feel yourself coming out of the seat, then it’ll stop so fast it will be forcing you towards the windscreen. In its purest form it is also manual.

There are two things I am not so keen on though, one is forgivable, the other perhaps less so…

The main criticism with the 981 was that the gearing was too long. in the 718, it still is. In order to get the engine singing in anything above first gear  you are over the UK speed limit. On track that is less of an issue clearly but it remains a criticism of the whole 981/718 model. Shortening the ratios would bring even more life to the party and allow easier access to the fabulous upper reaches of the rev band.

The new 718 GT4 engine is torquier and less highly strung so it is maybe less of an issue, but it is still an engine that thrives on revs. Being able to wring it out in second and third without getting locked up or becoming a menace, would transform the already great road experience.

The other thing is, that on the 718 for me the clutch is way too light. I grew up working in cars like TVRs, where you needed both feet for the clutch, and racing old Formula Fords where it felt like you were trying to lift the entire car with the left hand pedal.

The 981 was like that, a properly heavy, meaty clutch like it should be. I can forgive the 718 that though because the rest of it is as wonderful as ever. It’s just a shame I can’t buy one.

A face only a mother could love?

| Working in partnership with